sleep and obesity in children 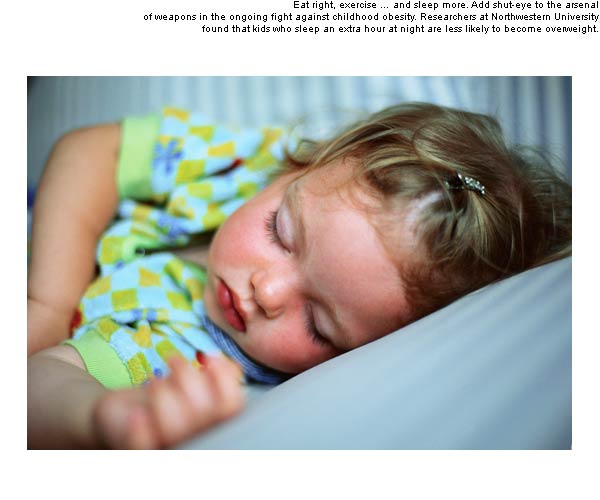 Here it is, another compelling reason to establish good sleeping habits with your children – it could prevent obesity. Oh, the other reasons: children are happier, more adaptive, and better able to concentrate and learn, not to mention they simply need sleep to grow. And, during a time when children are met with unrealistic ideals about body image and the rate of juvenile diabetes is soaring upward, it just makes good sense to give your child every advantage possible. I won’t get on my soapbox here, but read on to see the latest on sleep and obesity.

Researchers at Northwestern University have concluded from a study on sleep and obesity that as little as one hour more of sleep makes a big difference.

“Our study suggests that earlier bedtimes, later wake times and later school start times could be an important and relatively low-cost strategy to help reduce childhood weight problems,” says Emily Snell. Snell is co-author of “Sleep and the Body Mass Index and Overweight Status of Children and Adolescents” in the Jan./Feb. issue of Child Development.

The long-term study, published in the Society for Research in Child Development’s journal, tracked the sleep habits of nearly 2,300 children over a five-year period, then correlated those findings with weight gain. The study focused on children 3-18 years old and showed that sleeping an extra hour at night reduced a child’s risk of being overweight. For children 3-8 years old, later bedtimes appeared to be the culprit. One speculation is that a lack of sleep disrupts metabolic hormones leading to overweight kids. We also know that kids who are tired tend to be less active and more awake time equals more time to eat. All the more reason to establish healthy sleeping habits sooner than later!